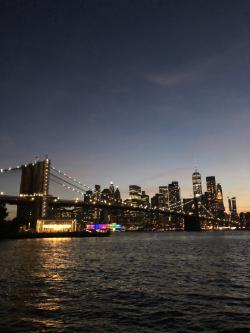 Have you ever heard of the German word Fernweh?

It describes the desire to go abroad, to travel, to see different places around the world.

I am Anais, 22 years old and I definitely had Fernweh.

After almost four years without traveling for more than 3 weeks in a row, studying a lot and one year of pandemic I finally decided that the time for another long journey had come.

Since I had the US citizenship, because I was born in Boston, but haven´t lived there for almost 21 years it seemed totally logic to me to travel to the country where everything is possible.

I informed my university, that I will take the SS off, quit my job in the BoulderWelt Dortmund, booked my flights to Denver and said good-bye to family and friends.

My first destination was Denver, the mile-high city - known for hot and dry summer days and amazing climbing locations in the canyons close by. I arrived and was warmly welcomed by a family I´ve barely known before but who are close family friends since our stay in Boston, when I was born. They offered me to stay in their home and soon they started to feel like part of my own family. Even though I had a nice place to stay, the first week was a little cultural shock. It was not that kind of cultural shock I had during my time in Peru four years ago. Back then I was living in a village built out of mud hoods, sometimes without fluent water or electricity. But in Denver it was the complete opposite. The city was built around those huge streets instead around the houses. Not a single small car anywhere, only those big SUVs and then these supermarkets. The first time I´ve went to one I had a list of things I wanted to buy but, in the end, I left without buying anything because of the overwhelming choices of different versions of the same thing! I was looking for alternative milk but instead of the 10 different choices we have in Europe they had even more, at least 30 – all packed in huge plastic containers.

After some time, the city became more and more home and I started to have a routine of going climbing, exploring new areas with the car I bought, because of the missing public transport system and my plan of doing a road trip in the end of my stay and working as a covid-19-swabber (yes that´s the official job-description!). Nevertheless, I realized soon, that a main difference between Europe and America is that Americans are living to work and Europeans are working to live. So, working 11 hour shifts with no longer than 30-minute breaks were not what I traveled for. Even though the mid-west society became part of my life, at the same time I missed more and more the history, culture and charm of European cities.

At this point I got accepted for an observer ship in the Montefiore Hospital in the Bronx, New York (NY), so I didn´t hesitate but booked a flight and quit my job in Denver. The second episode of my US-journey started.

My last week in Denver was a crazy mess of doctors’ appointments and drug tests for the observer ship, searching for an affordable accommodation in NY, close to the hospital but not too far from Downtown (the truth: 1,100$ a month is a pretty good deal for NY) and improving my knowledge in advanced heart failure until I finally arrived in central Harlem. The first weekend in NY was a whole journey itself. Every day I walked around 30,000 steps, because there is something to see everywhere – I simply couldn´t stop walking. When I told my roommate that Downtown (120 blocks from where we lived) is in a walkable distance he just laughed and told me that I was crazy.

The following week, when my observer ship started, I realized that doesn´t matter how much I studied it will take a while until I´ll understand anything because, in US-hospitals they are talking in abbreviations – only abbreviations. After my second week and the end of my first rotation in the heart failure service I finally understood half of what they were talking about. The following two weeks I have spent in the Cardiac Care Unit (CCU) and that was a breaking point for me. I got my own patients to present, asked every question that came to my mind and I got an amazing teaching from residents, fellows and attendings. The Montefiore hospital has one of the largest residency programs in the country and therefore has an excellent education system.

Now with one more month to go I am pretty convinced, that this journey, with all its up and downs will always stay a big and positive memory in my mind and that advanced heart failure is definitely a specialty I could easily imagine as a future job.

Do you have Fernweh?

Take the risk, it´s worth it!